Shafeeqah Cassim commenced her studies at the University of Cape Town in 2014. She has since graduated with a Bachelor of Social Science in 2016, a Bachelor of Laws in 2018 and a Masters in Commercial Law in 2019. Whilst at UCT Shafeeqah was involved in various community service programs such as Beauty Behind Bars (an initiative which seeks to provide hope to people being rehabilitated in Pollsmoor), LAWCO (a legal welfare organisation) and Students for Law and Social Justice (a program which sought to provide individuals in Khayelitsha with information concerning legal processes). Furthermore, Shafeeqah has been a member of the Golden Key Honour Society since 2016. In addition to the community service programs Shafeeqah was involved in, she also became a mentor to fellow students in the law faculty. Aside from her academics she is an avid bodyboarder and enjoys spending time with her cat.

Blog | Covid-19 and its Impact on Gender Based Violence

The Effect of the Lockdown on Victims of Abuse

The South African government’s swift and ruthless response to the Covid-19 outbreak was praised by numerous South Africans. A great deal of the South African population fundamentally believed that the imposition of the lockdown would essentially disrupt the chain of transmission which as is evidenced has been the case. For this sector of the population the demand made by the government for South Africans to remain within the sanctity of their own home therefore appeared to be a reasonable and valid request to “flatten the curve” of the virus. However for an overwhelming number of South Africans who are victims of domestic violence the declaration made by the President to lockdown the country appeared to be a potential death sentence. While being confined to our homes may be a means of safety and security, for victims of abuse it is essentially a place of fear and dread.

The Implication of the Lockdown for Victims of Abuse

It is a well-known fact that South Africa is home to the largest number of violent acts being committed to women globally. On average the femicide rate in South Africa is five times higher than the global average rate recorded with sexual assault cases increasing every year. During 2018 and 2019 an astonishing 114 rapes were being committed per day to women which is an estimated increase of 5% from the previous year.

In addition to the above South Africa essentially has the largest number of women being killed by their intimate partner in the world. This has occurred despite the establishment of various initiatives such as the ‘Sixteen Days of Activism of No Violence against Women and Children’ campaign held every year to raise awareness of intimate partner violence. Despite its establishment in 1998 50% of women who have been killed in our country have been murdered by individuals with whom they have an intimate relationship with. Domestic violence is therefore a serious and prevailing problem in South Africa which occurs on a continual basis.

As a result of the imposition of the lockdown and its subsequent extension of two weeks family members are compelled to stay at home together in close proximity to one another. The restrictive confinement of the lockdown coupled with the added stress of deductions or total loss of incomes has resulted in heightened levels of anger, tension and helplessness brewing between individuals in a household. As a result of this unfavourable and unfortunate situation hostility and aggression is easily able to be triggered within a household during this period of isolation.

Since the declaration of the lockdown the number of domestic violence cases has significantly increased which is no doubt a combination of the factors listed above. Victims of abuse are now placed in an even more precarious position as a result of the complete lockdown imposed by the South African government. As a result of this complete lockdown this has meant complete isolation of many victims to their homes. This is due to the fact that various public spaces have been required to close coupled with the fact that movement has been restricted. This has led to a restriction in the interaction which victims can have with support structures such as friends, neighbours and other family members. As a result of this confinement many victims of abuse feel as though they are trapped with no way out.

Despite the fact that the people of South Africa are under a severe and restrictive lockdown this does not mean that you are obligated to stay in an abusive relationship. If you do not feel as though you are safe in your home during this period there is a way to seek help and thereby escape the abusive situation you find yourself in at home.

If you find yourself in an abusive relationship please get in contact with the Gender Based Violence Command Centre which is a government programme intended to provide support to victims of abuse and achieve the elimination of all violence against women and children. The Gender Based Violence Command Centre fundamentally provides a 24 hour emergency contact number which you can call on: 0800 428 428. In addition to this helpline one can make use of the ‘please call me function’ on: *120*7867#. The centre additionally caters to members of the deaf community on Skype via the handle: ‘Helpme GBV’. Lastly the command centre has an SMS line for disabled persons. One simply has to SMS the word ‘Help’ to 31531. If the command centre feels as though the police are urgently needed in a particular situation they will easily be able to transfer your call.

Furthermore during this quarantine period the Thuthuzela Care centre will remain operational throughout the country as an essential service to provide medical support to victims of rape. Please find the contact numbers for the care centre in each province: 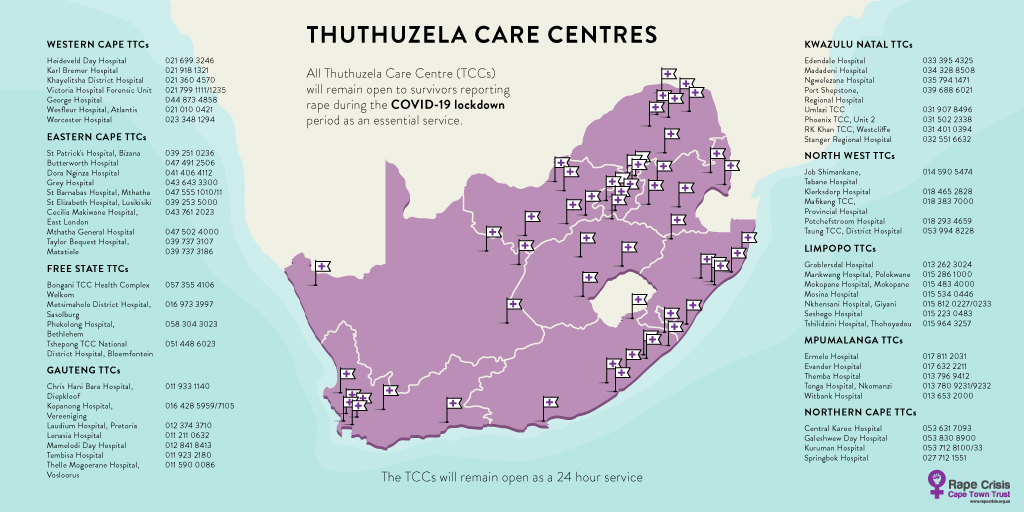 Aside from the above there are additional organisations which will remain open during the lockdown which will provide support to victims of domestic violence.

In addition to the above please find a referral directory of all of the women’s shelters in South Africa and how to obtain an interim protection order during the lockdown:

Can I obtain a Protection Order during the lockdown?

If the interim order has been granted and subsequently served should any condition be breached by the respondent he/she will receive a fine, imprisonment or both.

Stay safe and DO NOT suffer in silence. This lockdown does not mean you have to endure any form of abuse. Please find additional helplines below:

For the best legal advice and personalised service, let's talk